My Plays Produced and Fiction published and performed

March 28th 2021.My book America Awaits Us, My Lovely and other stories is published by Troubador Publishers.

A wonderful story collection! They are so touching, unflinching, melancholy. And the misplaced optimism so gently dismissed – oh dear- everybody just about holding on. You have a terrific ear for dialogue – and I like the way the language is stripped down and the characters too, stripped of more and more identity.  Chris Buckton, writer, educationist.

LINK https://youtu.be/13e_09oBmXg  to Interview with Sean Styles on BBC Radio Merseyside about my and my father’s connection with Liverpool and my story Ellen in the book set during the 1915 Liverpool riots after the sinking of RMS Lusitania by a German U Boat.

2020 (March): Two of my stories The Square and Ellen are published in the anthology ‘Eavesdropping’ put together by a few writer friends, and purchasable through Amazon as a paperback or eBook.

2020: My story SARAH has been short-listed and is to be published by Hammond House Publishing in the anthology ‘Leaving’ on the 6th February 2020.

2018. My story SARAH has been long-listed (was in the first 26 of 700 submissions) for the Royal Society of Literature V.S. PRITCHETT short story Prize.

2017. Autumn. My story THE DROWNINGS published by The Binnacle, the Literary Journal of Coastal Maine at the University of Maine at Machias.

May 2015. THE BALLAD OF CARMIL FORESTER now published in print Issue 4 of Valve Journal.(Glasgow).

June 2014. DUNCAN is published in June 2014 issue of The Irish Literary Review.

‘I loved DUNCAN, the saddest tale, imprisoned by caution, everything shrinking, brilliant end. I like the dry voice and the relentlessness of it!’ Chris Buckton, writer, education consultant.

March 2014. DYE IT RED, SHE SAID is in the latest issue of Smoke London Peculiar – a great edgy off-the-wall magazine. My story is free to read CLICK HERE  Or on Smoke’s website HERE

January 2014: Final Chapters Anthology published by Jessica Kingsley Publishers in which my story An Honourable Life is included is now available for purchase from the publisher’s website CLICK HERE

2014: AN HONOURABLE LIFE (short story)to be re-published in an anthology ‘Final Chapters’ by Jessica Kingsley Publishers.

20th MAY 2012: THE CAMEL’S BACK (short story) read by Amanda Hadingue at White Rabbit’s ‘Are You Sitting Comfortably’ event at the Secret Garden Pub, Battersea Park Road, as part of the Wandsworth Festival.

27th MAY: ANTHONY AND MONICA (short story) read by me at StoryTails storytelling event at The Three Crowns Pub, Stoke Newington.

‘A Cuppa Tea and a Kit Kat’ in the long list of 16 submissions for the Felixstowe Festival Short Story Competition 2015.

Re: ‘An Honourable Life’, ‘How Are You Doing?’ and ‘The Crow’: ‘They are sensitive and engaging and I have enjoyed reading them very much’. Penny Thomas, Fiction Editor. Seren

2021: My play A Family Affair is to be adapted by Muhammad Imran Fatani in his ‘Native Desi Language Style’ and performed in his Directional Course Project at the National Academy of Performing Arts, Karachi, Pakistan.

2020. Photos of my PAKISTANI and INDIAN friends in SAN FRANCISCO Zooming my comedy A Family Affair. 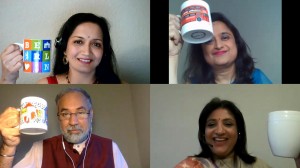 2019.The Brighton Scratch Night. 15/10/2019 – 17/10/2019. Unmasked Theatre, working in collaboration with Pretty Villain, George Lassos The Moon Theatre and The Rialto Theatre are proud to announce the return of The Brighton Scratch Night. Running across three nights, with extracts from six eclectic and exciting scripts, one of the biggest scratch programmes outside of London is back.The Full Line Up:Battlesong by Aine King directed by Luke Ofield.Sammy by Christopher Owen directed by Matt Turner / George Lassos The Moon Theatre.
Music for Cats by Fran Lanting directed by Scott Roberts.
Brain Fog by David Varela directed by Christine Kempell.
The Anchor and The Wave by Joe Von Malachowski directed by Lauren Varnfield.
Shy, The Devil by Wendy Haines directed by Pip O’Neill.
Tickets £5

BRIEF SYNOPSIS: It’s five years since baby Sammy died. His parents Carrie and John Botham had unsuccessfully gone to the High Court to prevent the hospital from removing his life support. The case created international interest, especially among pro-life supporters. Five years on, fragile Carrie is still grieving. John is trying to encourage her to ‘move on’. Enter Moira, a pro-life fundamentalist whose presence threatens Carrie and John’s already imperilled marriage….

2018: BUSH THEATRE. My play LAYING THE TURF is among the 100 scripts out of 850 which made it to a second reading at The BUSH THEATRE. ‘The voice is unique – The play explores well their varying attitudes towards class, power, capitalism and culture.’                                                      Brief synopsis: 4 park employees lay turf at the front of a new fountain erected in honour of a multi-millionaire sponsor of an extensive rehabilitation of the park which has included the building of a large concert hall. They are unhappy about the commercial changes that have been made to the park and with the character and activities of the sponsor. Tomorrow there is to be a VIP opening celebration. From time to time they can hear Midsummer Night’s Dream being performed in the Open-Air Theatre in the park.

2018 Papatango New Writing Prize: ‘Laying the Turf’ reached the second round, one of 312 out of 1384 entries. - ‘It’s an interest premise and a very good inclination to represent characters on stage that are rarely seen. You also show a clear ability for comedy.’

2017. November. My short piece DROWNINGS performed as part of the ‘Best of Bolton’ programme at the Octagon Theatre, Bolton

2017 June 3rd: 1st performance of RECITAL performed at Caterham Festival by The Another Way Theatre Company.  SYNOPSIS: ‘Temperamental’ Gillian is a concert platform singer. ‘Boring’ Trevor her pianist. They’re on tour. She has a sore throat. She has a concert tonight. But Trevor has broken his wrist! They desperately try to find another pianist. No one is available. By the end, Trevor has done his back in and can’t stand up straight, and Gillian can’t speak. Disaster!

2016 June: THE TOUCH OF A BUTTERFLY’S WING long listed for the PAPATANGO Competition. Feedback from readers was that: A strong, heartfelt piece of writing exploring difficult and pertinent themes. Bernard’s character is totally affable and well-drawn, which makes the reveal at the end all the more tragic, and allows us to explore a complicated issue from several sides. Dialogue is strong, and the piece is well-paced. Congratulations for tackling such difficult themes.

1995 – 2004: A PARSON’S TALE Toured extensively throughout the UK and in the Gulf States between 1995 – 2004.’Hilarious. Involves the whole audience. By the end of the evening it felt we were taking leave of a dear friend’ – Lichfield Mercury. CLICK HERE FOR A PARSON’S TALE EXTRACTS

2000: RIGHT HO, WODEHOUSE! Toured the UK extensively between 2000 and 2004. Based on the writings of PG Wodehouse with songs by Jerome Kern and Ivor Novello. ‘Absolutely spiffing’ – D. Telegraph.

1980: SCRIPTS FOR TWO SHORT (Educational) FILMS
on Employment Equality and on Youth and Alcohol.

1973: WHAT!
a revue – music and lyrics by Alan Mason and Diana Bishop, performed at the Howff, Chalk Farm, London.

1970: CHAMPAGNE FOR CHEKHOV
performed at Crewe Theatre and Keele University.